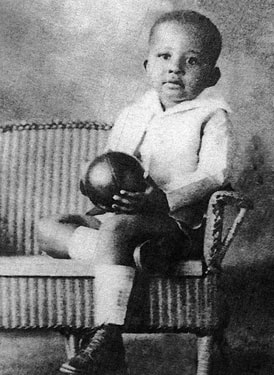 Young Jon Lockard
Painter, educator, and mentor, Jon Onye Lockard, was born January 25, 1932 and raised in Detroit, Michigan, on the city's east side.  Growing up, he was known as "that drawing a** cat" by his neighborhood peers.  An avid observer from an early age , Lockard honed his skills by sketching everything he saw around him.  He graduated from Eastern High School in 1948, from Wayne State University in 1955, and from the University of Toronto in 1958.


Working as a traveling portraitist in the late 1950s and early 1960s, he worked by scheduling private sittings, and publicly painted at various art fairs like Seattle World’s Fair in 1962, and the Ann Arbor Street Art Fair. During this period, Lockard adopted the name “Onye”, which is from “Onye Eje”, Nigerian Igbo language for “artistic traveler.” 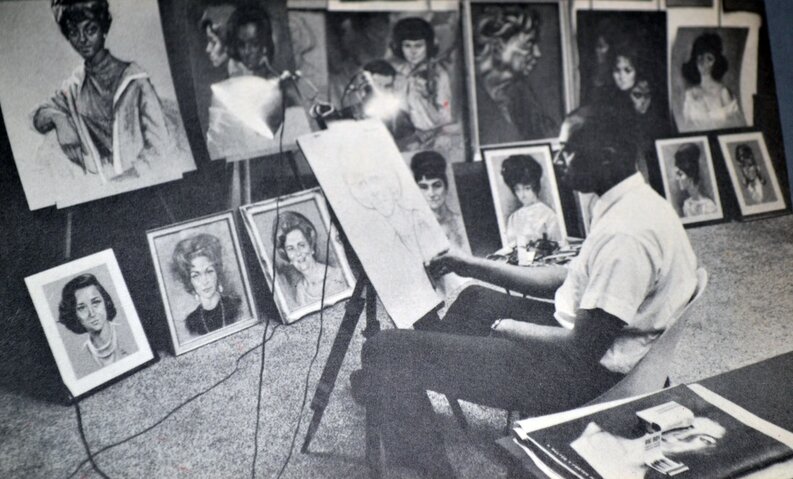 Lockard in his portrait studio 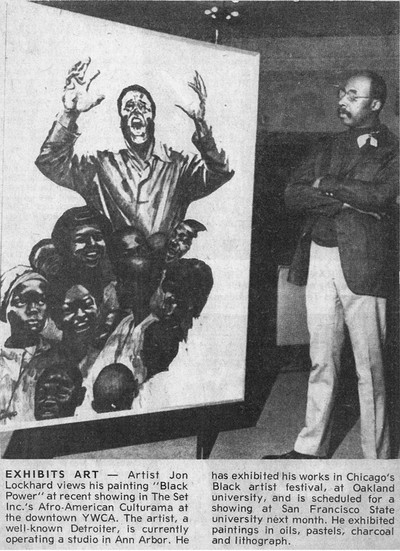 Lockard presents his painting "Black Power" during a showing at The Set Inc.'s Afro-American Culturama. 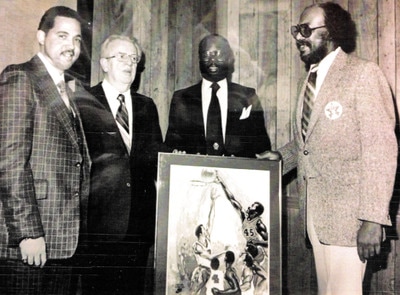 The artist presents a work to the NBA Commissioner David Stern and others, one of many artworks depicting players. Commissioned by Nike for an All Star Game.
Jon Onye Lockard was ever in pursuit of visually presenting intellectual Black culture and history, whether diving into the African Diaspora, questioning the histories of “accepted norms” or honoring civil rights giants upon whose shoulders future black achievement would become possible. His expressions are made at every scale for every body, from 1995’s Ebony Sea, a children's book, written by Irene Smalls, through a roomful of floor to ceiling murals, like "Continuum" at Wayne State University.

As the former president and lifelong member of the National Conference of Artists (NCA), Lockard guided the group to travel internationally, at one point visiting Goree Island, off the coast of Senegal, West Africa, historic hub of slave trade shipping route. He was Co-Founder and Associate Director of The Society for the Study of African American Culture and Aesthetics, hosted and co-produced The Society's biweekly journal of cultural affairs, “Sankofa”, previously aired on Barden Cable Television of Detroit. Most recently, he served as a Senior Art Advisor for the Martin Luther King, Jr. Memorial in Washington, D.C. In addition to membership in the aforementioned organizations, Lockard founded his own company, Visions of Destiny, DBA, to share his art with the world and is protected now by the Jon Onye Lockard Foundation. 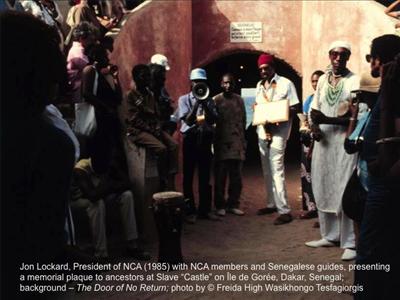 Lockard, as president of the NCA, presents a plaque at the innumerable lost slaves that passed through the "Door of No Return" 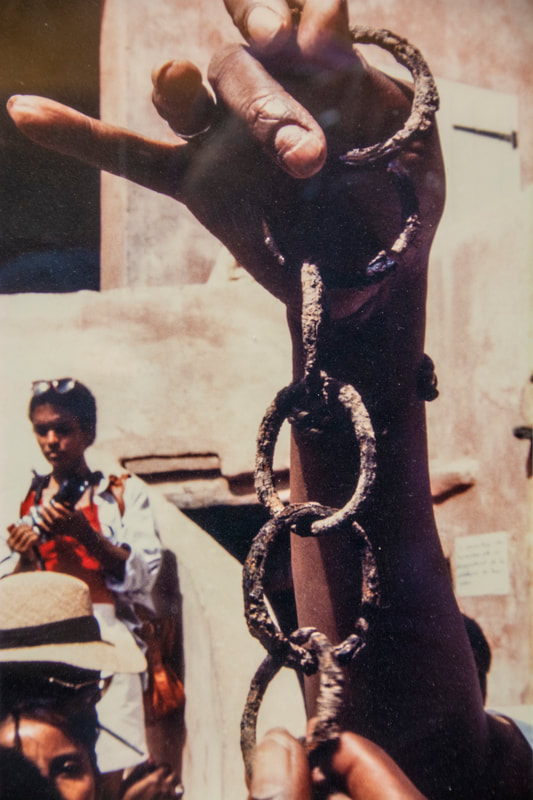 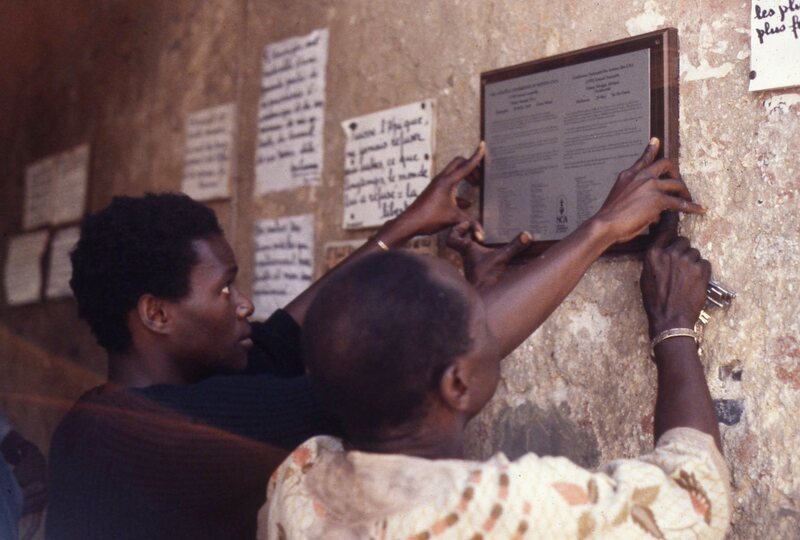 Senegalese guides mount the plaque from the NCA honoring their ancestors.
Concurrently producing an impressive catalog of works over fifty years, Lockard was also a professor and mentor to many at both the University of Michigan and Washtenaw Community College. He was a founder of the U-M Department of Afroamerican and African Studies. At WCC, Lockard was a professor, and later professor emeritus, in the Humanities, Social and Behavioral Studies department of Washtenaw Community College. At both universities, he taught Life Drawing and African American Art and Culture for 40 years. His paintings can be viewed across both campuses: the University of Michigan is home to many of the murals in residence hall multicultural lounges, and at WCC he contributed life drawings and one-of-a-kind portraits that are seen every day throughout the campus. Lockard’s murals also found a natural home on other college campuses, like in his alma mater Wayne State University’s Manoogian Center and Central State University. Robin Dunitz featured Lockard’s mural work in Walls of Pride. 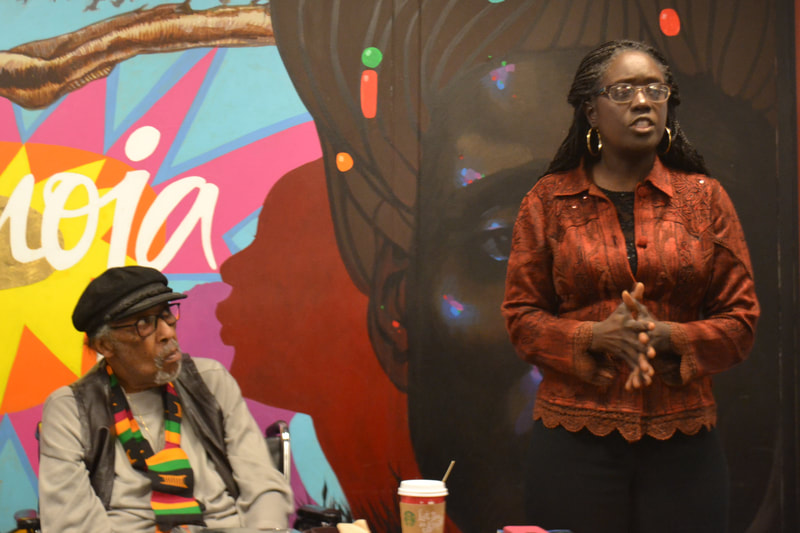 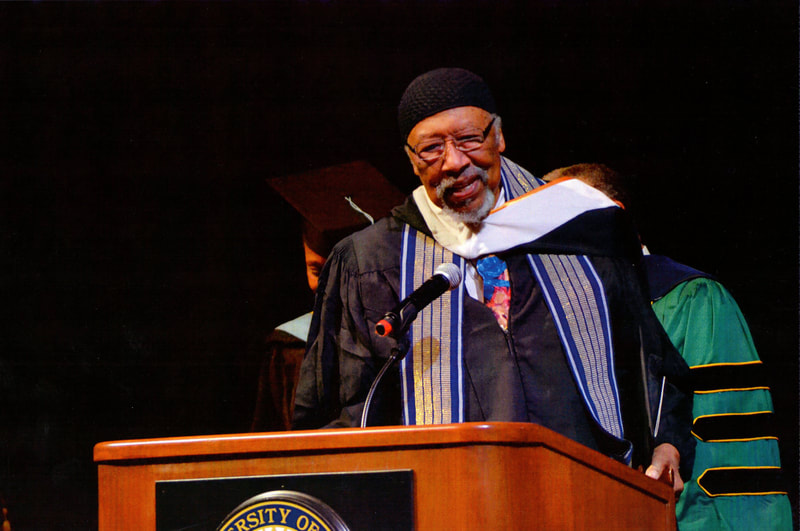 Lockard addresses a University of Michigan audience during a DAAS graduation ceremony. 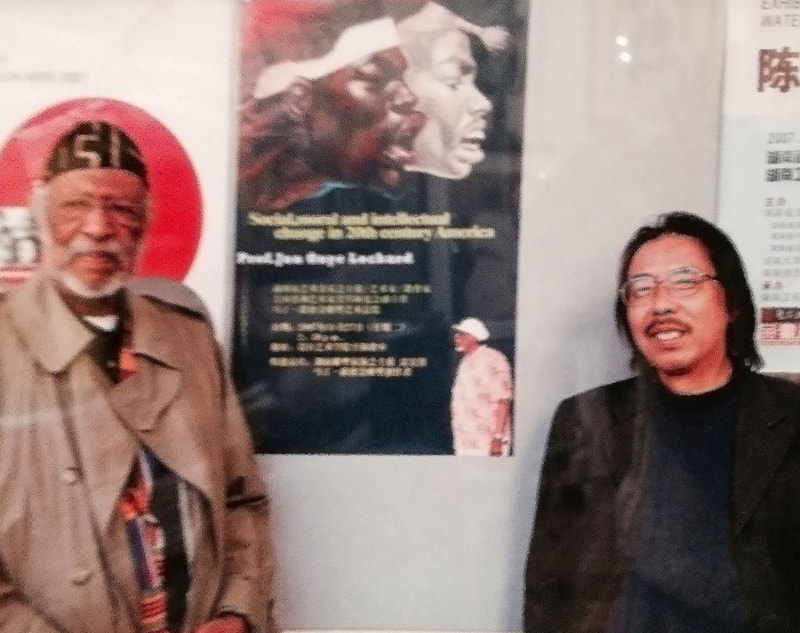 Lockard poses with master sculptor Lei Yi Xin after his lecture at the art school in Fujian, China.
Although in various private collections, Lockard also has paintings in the collection of Detroit’s Charles Wright Museum of African American History Art, the University of Michigan Museum of Art, the National Afro-American Museum & Cultural Center in Ohio, and at Grand Valley State University. Lockard’s work has been exhibited nationally and internationally for several decades.
Links of Interest:
History Makers Interview: 'No More'
History Maker Interview: 'What are We Going to Tell Them'
Suriname-Jon Onyé Lockard Tribute-2015 (extended)
Onye Ije: The artist with many friends
Sankofa: The Art and Legacy of Jon Onye Lockard

During his lifetime, Lockard explored the lands, people, and cultures of the world.  In between teaching and painting, he traveled throughout Africa, Asia, North and South Americas.  He loved music, good food, books and surrounded himself liberally with all three.  His home studio accommodated hundreds of books, magazines, video and audio tapes, CDs, and assorted world artifacts.  One might hear the tunes of Nina Simone or John Coltrane wafting from his workspace as one walked by.  He stayed abreast of local, national, and international political, social, and cultural events of the day; he read the the newspapers daily along with watching the news and a host of documentaries on television.  Professor Lockard shared his wealth of experiences and lessons with his students, his relatives, and his large network of extended "family".

Jon Onye Lockard joined the ancestors on March 25, 2015. Lockard is survived by his wife, Leslie, three sons, three grandchildren, a brother, a multitude of devoted friends and thousands of students.
"It's only a journey when you have a destination."